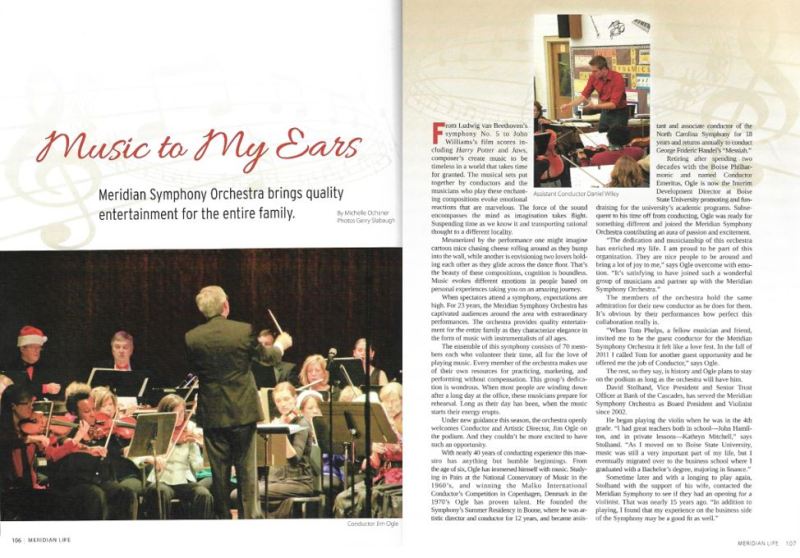 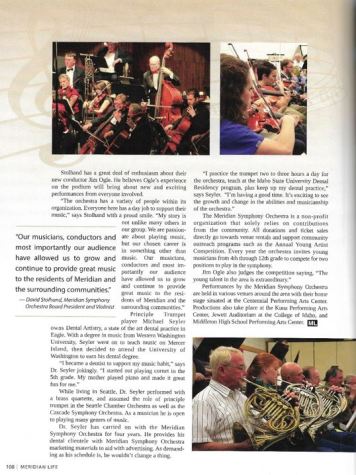 MUSIC TO MY EARS

From Ludwig van Beethoven to John Williams, composures along with orchestrated symphonies allow music to remain timeless in a world that takes time for granted. The pieces put together by conductors and the musicians who play enchanting tunes such as Vivaldi’s Concerto for Two Trumpets, capture your soul. The force of the sound encompasses the mind as imagination takes flight for a few short hours. Suspending time as we know it and transporting rational thought to a different locality.

Mesmerized by the performance one might imagine cartoon mice chasing cheese rolling around as they bump into the wall, whereas another is envisioning two lovers holding each other as they glide across the dance floor. That’s the beauty of these compositions, cognition is boundless.

When spectators attend a symphony the expectations are often high. For 23 years, the Meridian Symphony Orchestra has captivated audiences around the Meridian area with extraordinary performances. The orchestra provides quality entertainment for the entire family as they characterize elegance in the form of music with instrumentalists of all ages.

The ensemble of this symphony consists of 70 members each who volunteers their time all for the love of playing music. Every member of the orchestra utilizes their own time practicing, marketing, and performing without compensation. The dedication of this group is wondrous. When most people are winding down after a long day at the office, these musicians prepare for rehearsal. Long as their day has been, when the music starts energy erupts.

The orchestra openly welcomes Conductor and Artistic Director, Jim Ogle on the podium this season. After spending two decades with the Boise Philharmonic, he is currently the Interim Development Director at Boise State University promoting and fundraising for the university’s academic programs.

After taking some time off from conducting, Jim was ready for something different and joined the Meridian Symphony Orchestra contributing an aura of passion and excitement.

“The dedication and musicianship of this orchestra has enriched my life. I am proud to be part of this organization. They are nice people to be around and bring a lot of joy to me,” says Jim Ogle overcome with emotion. “It’s satisfying to have joined such a wonderful group of musicians and partner up with the Meridian Symphony Orchestra.”

The members of the orchestra hold the same admiration for their new conductor as he does for them. It’s obvious by the performances how perfect this collaboration really is.

“When Tom Phelps, a fellow musician, and friend, invited me to be the guest conductor for the Meridian Symphony Orchestra it felt like a love fest. In the fall of 2011, I called Tom for another guest opportunity and he offered me the job of Conductor,” says Ogle.

The Meridian Symphony Orchestra is a non-profit organization that solely relies on contributions from the community. All donations and ticket sales directly go towards venue rentals and maintain community outreach programs such as the annual Young Artist Competition. Every year the orchestra invites young musicians from 4th through 12th grade to compete for two positions to play with the orchestra.

A partnership with Meridian Schools, the orchestra performs at Centennial